First ride in the K13 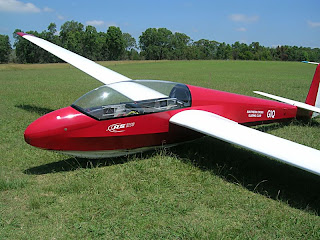 Finally, at the end of my holidays, I got a day with promising weather (a Friday) that let me plan to get out to Camden to fly. I had found the transition from flying in NZ to flying locally a bit of a hit to my confidence. Looking back, I wasn't all that happy with my first flight at Camden with Southern Cross. I found the low tow position difficult to get right, the IS-28 felt like a tractor (with the joystick seemingly under my chin) and my landing was rubbish.
So I was a little nervous driving out to Camden on Friday, but the weather started looking better as I got further south and by the time I got out there (about a 45-minute drive) I was excited about flying again.
There was a surprising amount of club members out at the field. I'd seen on the club's Google group that the whole Camden field had been closed because of waterlogging after all the bad weather, so I imagine there were plenty of people who hadn't been able to fly for a long while.
However, I didn't have too long to wait. Duty instructor was the pleasant John J and today the two-seater for students was the K13. I'd always thought of the K13 affectionately, but never as a "proper" sailplane - more an old-school relic, so this would be interesting. It's covered with fabric for God's sake! Other club members assured me it flew sweetly. The club's K13 is a pretty machine - bright red with white wings and a bubble canopy.
When it was my turn to fly I did the ABCD check, then John looked over my logbooks and we discussed what I wanted to learn/revise:

I climbed in and got comfortable. The brake lever on the K13 is a long way forward and I found it a bit of a stretch for my dodgy left arm (which won't straighten after a bad elbow break). I had to have my left shoulder strap looser than normal so I could lean forward a little to reach it). The trim control is on the right side up near the canopy rail and moving trim doesn't move the stick - the K13 has trim tabs on the elevators. Fixed gear and no flaps. Rudder pedal position is adjusted by moving a set of sort of ratchet teeth. This time, I made sure I had full rudder movement.

John J advised me to line up the towplane's mirror and tailplane to get in the correct low tow position and this reference point helped a lot. Once I got there, I relaxed and my tow went much better. After release I trimmed for 55 knots (got a nice comment from John for that - he said I'd trimmed correctly, slowing to the desired speed, than trimming, while other students often try to use trim to get them to the desired speed) and then went looking for some lift. When I'd arrived at the field, there were some promising coulds about and another clubbie, Brian, had said that the Blipmaps suggested things would get moving about 1.00 pm. However, by my takeoff around 2.00 pm, it was a blue hole, with a sort of mist and some very whispy clouds. No-one was staying up for long.

John had me locate the field (which wasn't where I was expecting it) and then showed me a few landmarks and likely thermal locations. We'd got some lift from a cloud during the tow, but after release, the cloud had disappeared! At one point, as we were flying towards a curve in the river where sometimes thermals are triggered, a small cloud appeared out of nowhere right in front of me, so there was definitely something there. However, thermals were hard to find and short-lived (or I was drifting off them, or turning the wrong way). In the PW6, thermals would give one wing a definite nudge, indicating clearly which way to turn, but maybe the K13 was heavier, or more flexible or something, because while I kept waiting for some thump to show me which way to turn when the vario showed lift, I never got one!

I did manage to stay in one thermal long enough to claw back a couple of hundred feet, but there was as much sink as lift around and lift was hard to find. What was cool was being joined by another sailplane also scratching around for lift. We shared the same thermal (or tried to) for a little while, and while I'd brought my camera hoping to get some shots from the air, I was too busy keeping a lookout and trying to stay up to get it out. Next time.

There was lots to see and having at least 2 other gliders in the immediate area meant I was kept busy looking for aircraft. Very cool to see them above, below, behind or in front. Saw a few birds too, including some Ibis below and a hawk or kerstrel zooming along. I also got a bit of a fright from a kid's red balloon blasting past the canopy at a great rate of knots!

After searching for more lift, we found overselves in a lot of sink and it was time to get in the circuit. I was much happier about my circuit and landing this time than last. Downwind checks whent well, John had to remind me when my speed dropped a little on downwind and my radio call missed "Camden Traffic", but other than that, I got in the right position, judged my turn to base well and I was happy with my landing.

I got the brakes out on base, watched my aiming point and managed my brakes and nose to maintain 55 knots. My roundout was a bit strange, probably because the K13 seems to have a bit of a nose-down attitude from the front seat. I rounded out at what i thought was the right height and waited for the landing, which happened a little more firmly that I'd expected (not too firm). John said I'd flow it onto the ground. I may have ballooned a little at roundout and then put the nose down a bit.

No time sadly for another flight that day - had to get home to pick up my daughter from child care - but it was a nice flight, though only 26 minutes.

I didn't get to stall or spin the K13, i hope to do that next time. Tasks to work on for my next flight:

speed control in the circuit