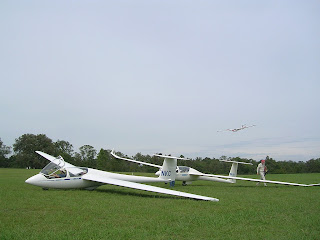 
Further to being a useful gliding club member, I volunteered to help some of the club members (ex Air Force and/or Air Force Reserve) operate a flying day for the local Air Force Cadets. About 20 cadets would have flights in a club two-seater through the day and there was a call via the usual email contact for members to help out.

I arrived early as usual and helped get the aircraft ready and listened in to the briefing of the cadets, I was offered (and accepted) a quick first flight in the K-21 before the cadet flights began (about 10.00 am). The day started as still, with a misty sky and high cloud. No thermal activity at all and so perfect for circuits. Tow to 2,000 feet was the smoothest I’d ever felt. I could have flown the tow hands-off I reckon.

No lift, but no sink either once I was up there. I worked on judging the break-off point and angles to the strip. I flew my circuit a little wide and still ended up a little high (turned in a bit too early), had to get a fair bit of brake out, then was able to put some away and come in on half brake. I felt more comfortable managing the brakes to keep the aiming point where I want it than I had for a while.

I lost a little directional control on the ground though and end up slewing a little left in the landing run. Not sure what happened. But man, the wheel brakes are good on the K-21, unlike any other glider I’ve flown.

After this first flight (14 minutes), I helped out with getting cadets strapped in, briefed and launched, including making sure each of them participated in a launch – retrieving the tow-rope, signalling the required tow height to the tug pilot, hooking on and waving off etc.

There was lots of this and as the day progressed the weather heated up and the unmistakable signs of an afternoon thunderstorm could be seen in the west (unusual, the usual direction for summer thunderstorms in Sydney is the south). 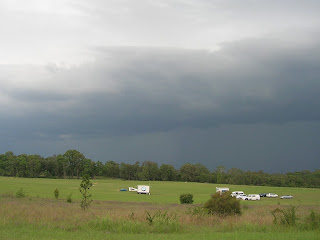 There were other club members flying in addition to the cadets and at one point, later in the afternoon, the club’s DG-1000 was without a taker. I quickly took up the offer (though I found the DG a handful on my last flight in it, in Cootamundra) and took a tow to 2,000 feet for more circuit practice. Not a remarkable flight and I was happy with my circuit, approach and landing. My instructor wrote “General flying good, work on circuit.”

After a few more launches for the cadets, we’d got the last of them off as lightning started to flicker and a wall of black cloud built up. There was a dramatic storm later, which I raced ahead of down the M5 Motorway home.
Posted by smith at 5:40 AM No comments:

Too hot to fly 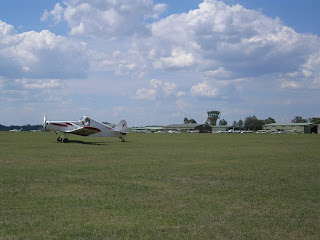 
One of the things about being a member of a gliding club is that there's an expectation that members will "put in" to do their bit to help the club operate, rather than just turn up and fly. I've always been conscious of this and make an effort to be part of the club's operations. This usually involves arriving out at the clubhouse early to help pull gliders and the towplane out of the hangar, wash them (I haven't finished my DI course yet so I'm mostly muscle at the moment) and tow them down to the launch point and then later running around to help launch and retrieve gliders.

On this day, which was an unusually hot summer day even for Sydney, getting to about 44 degrees C (over 110 degrees F), I made the decision not to fly when I was due for my second flight, because I was exhausted from the launch and retrieve duties I took on.

By getting out to the club early (about 8.30am which requires me to leave home around 7.30am) I got my name at the top of the list to fly. Initially I was slated to fly the club's K-21, but when in my walk-around (the ABCD checks my club does before beginning the CHAOTIC check) I discovered the plane had not been signed off after its DI (this necessitated tracking down the DI-er and getting him to sign it out), so we pushed it off line and I climbed in the IS-28.

The day was heating up and the buckles and even the harness straps were almost too hot to touch. It was coller aloft but no thermal activity had been triggered yet. I took a tow to 3,000 feet
to work on my angles and circuit heights. While there wasn't lift, there was almost zero sink and so the flight consisted mostly of reviewing and commenting on the angles to the strip without reference to the altimeter, judging when to join the circuit and then doing the circuit without the altimeter. My notes indicate that the instructor thought I was flying well, speed control was good, though I joined the circuit a little early (the fault I am trying to deal with), didn't get more flap out when we hit lift in early base (about the most reliable source of lift at most glider fields) and so was then was a little steep on final, using more brake than the half-brake I want to be using. This landing, while a little steeper than ideal, was better than previous high finals I've been guilty of (where I've even needed to sideslip).

After this flight I spent hours running wings and retrieving gliders (it was so hot I couldn't pick up metal towbars with bare hands) while the day turned into a boomer, with Cu's everywhere (see the photo above - one of many I took in wonder at a sky usually blue and clear of clouds) and pilots talking of the whole sky going up and having difficulty staying within the 4,500 foot airspace close to the strip.

It was too hot to be outdoors, let alone running about in the sun. The sun had a big dark halo and at one pount I looked up and saw a strange zig-zag horizontal rainbow in the sky (I found out later this was a Circumhorizon Arc, an effect created by sun shining through high ice crystals in high cirrus clouds) - it was a strange day indeed.

The upshot was, even though it was a dream day to be in the sky, I was so dehydrated and exhausted, feeling sick and light-headed, that when it came time for my next flight at about 2pm, I declined. I'm pretty sure I made the right, safe decision.
Posted by smith at 5:46 AM No comments: