For the first time I have managed to do some mid-week flying at the club. My club operates 7 days and the weather forecast looking good for Tuesday and Wednesday coincided with some leave. With only a handful out at the cub on the Tuesday, I got two check flights in (the second one 35 minutes with the instructor showing me some thermalling techniques), followed by a 57 minute solo flight with lots of thermalling.

I had a few gadgets with me that day - my FlywithCE logger (more on that in a later post I think) and an 808 mini keychain video camera (ditto - more on that in another post). The logger worked fine, but the 808 camera hadn't charged with its supplied USB connection.

I planned a 3,000 foot launch (cloudbase was about 3,000 or a bit more by that time) but the tuggie took me through a pearler of a thermal, so I bunged off early, at a bit over 2,000 and then connected with good thermals right up to cloud base. 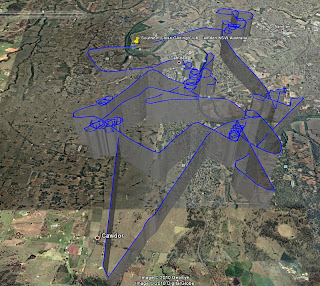 There were a lot of clouds in streets and these provided reliable lift of 2-6 knots, but with buckets of sink in between the streets. I practiced my thermalling techniques and wandered about the sky just enjoying everything (my track in Google Earth is on the right). At one point, after about half an hour, I heard glider control asking the tower to call me to ask me my location and height. Tower's comment before making the call was "you might not want to hear the answer!". So I was pleased to report that I was at 3,400 feet two miles south and at that point I was climbing in strong lift.

It was a delightful day's flying, and I could get back to cloudbase seemingly at will. At one point, heading back towards the field,  I had to descend at 80 knots with full airbrakes out to get under a cloud that had a base below me. I also had to circle to throw away height to join the circuit.

The 57 minute duration was an added bonus - I have paid up for the Club's Bulk Flying Scheme - $420 up front means that all my flights are free up to an hour's duration, so all I had to pay were tow charges. Beauty!

The second day, the Wednesday, was forecast to be much better, until a thunderstorm in the afternoon, but the situation changed and the day was flat at the start - no-one could find any lift. I got some useful experience in helping to rig the Club's DG-303 and in my two short check flights with a perfectionist instructor I learned more about precision flying, and I finally managed a solo flight at about 3.00pm, with storm clouds brewing in the north.

I had my new Panasonic Lumix TZ10 camera with me and took a few snaps below, including flying in company with the DG, trying to make something of some scratchy lift. Maintained height for a while, but couldn't centre it - was in as much sink as lift every turn, no matter how I adjusted.

Looking at my logs in Google Earth and SeeYou from that day, I was pleased to see how nice my circuit looked, especially my nice square base legs. 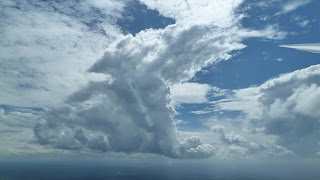 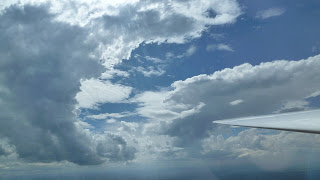 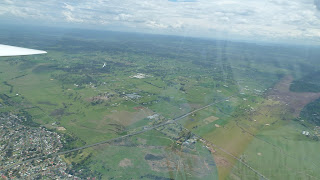 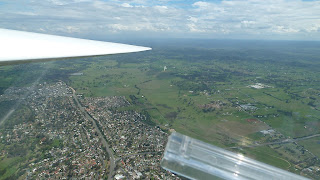 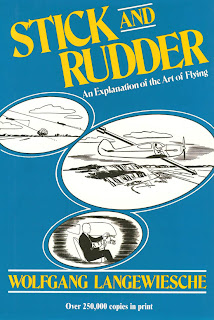 Wet day and no flying, so I picked up my well-thumbed copy of Wolfgang Langewiesche's classic book, Stick and Rudder. This book, written in 1944, has been a sort of bible for pilots, particularly glider pilots. I can't recall who recommended it to me, but I'm grateful to them.

The book's a bit repetitive and simplistic, but it has some important lessons for a glider pilot. Overall, it's an extended lesson about Angle of Attack and the importance of getting the stick forward if things look like getting unstuck.

It's a little quirky and old-fashioned in talking about flippers instead of elevators, and pressing for tricycle undercarriage on planes to cut down on ground loops, but it helped me to understand more about adverse yaw etc. It's the book for convincing (or amazing) non-flyers that the stick controls speed, the engine controls altitude and the rudder doesn't turn an airplane!

For all it's old-fashioned charm, recommended.
Posted by smith at 2:34 AM 1 comment:

I was scheduled to be duty pilot today, but the weather forced us to cancel flying. Even though it's a long weekend, there weren't many folk who had put their names down on the flying intentions page. Two students and one AEF, so it would have been a quiet day. Here's the process I went through.

The club has a member who is a meteorologist and he has developed his own section on the club's forum where he makes predictions for upcoming days. Given I live 45 minutes from the club and weather conditions at Camden can be vastly different from home, I can't really look out of my window and work out what the day will be like. I called the Automated Weather Information Service for Camden just after 6.00 am, but it was inconclusive.

I waited until 7.15am but the gliding forecast on the club's forum hadn't been updated, so I had to head out to the club. I got there at 8.00 am to find a grey day, cloud from 1,500 feet to 3,800 feet, and gentle rain. Our tame  meteorologist had updated his forecast and indicated that 25mm (1 inch in the old money) of rain had fallen in the past 24 hours and a NOTAM was expected that would close the grass strips that we operate off (too boggy).

However, as Duty Pilot I can't make that call alone, so I had a series of phone calls to make to the Duty Instructor and to the AM tug pilot and the two intending students, as well as the man who had booked the Air Experience Flight (AEF) before wending my way home through the rain.

Disappointing.
Posted by smith at 2:01 AM No comments: