Back in the air – but in the West 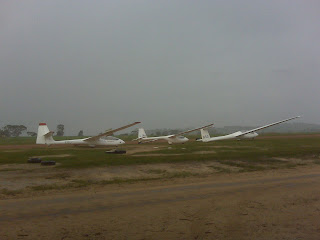 Well, a long, long time since I’ve been in the air. 2008/2009 has been a frustrating year for me in terms of my flying progress, but a satisfying year in family and professional life. Flying definitely had to take a back seat to the rest of my life, including the birth of my second daughter Ruby and a whole lot of overseas and interstate travel for work. In the end I just couldn’t fit gliding in. I knew I was getting rusty and not achieving the things I wanted to, but I figured I just had to put it aside for the time being. Well, the time being stretched out further and further. Finally, an extended project transfer to Perth Western Australia provided the opportunity to do some flying on free weekends.

Before travelling to Perth I posted a message on the aus.soaring message boards (see here - http://www.mail-archive.com/aus-soaring@lists.internode.on.net/) and got quite a few responses letting me know about the clubs close to Perth. There’s three, all within about 1.5 to 2.5 hours drive – Beverley Soaring Society, Narrogin and Cunderdin. Each apparently has a slightly different character, different fleet and different facilities. The great advantage to flying in WA compared with Camden seems to be airspace restrictions – which are less restrictive over in the west.

I decided on the Beverley club because it was closest to where I was living, has a nice two-seater fleet, flies Fridays, Saturdays and Sundays, have a clubhouse providing for free overnight stays for visiting pilots and most people who responded to my post mentioned how friendly the club is. So on Saturday I hired a car and drove out west to Beverley (pretty country) after packing some clothes and a sleeping bag.

I got to the club about noon to find they were pretty busy doing annual checks for club members and training for about 4 others students, including three young guys who had recently soloed on a two-weekend ab-initio course.

However, I was made welcome and arranged to have my logbooks checked over and an instructor matched to me. Beverley has a sealed runway (16/34) which is mostly gravel and an unsealed 08/26 runway which has partially been reclaimed by the local farmer and so is partially unusable. Clubhouse facilities are very good, their “pie-cart”, called the Eagle’s Nest, is a sort of truncated caravan towed by a Hiace van. A row of trees along runway 16/34 create a bit of rollover in westerly winds, but overall facilities are pretty good.

The weather wasn’t all that kind however. It was a bit cool and cloudy with passing showers and no breeze to speak of and flying was interrupted a couple of times during the afternoon by rain. Not soaring weather but pretty good for what I wanted to do – which was to practice some circuits and get used to flying again.

Their main training two-seater is an ASK-21, Bravo Sierra Sierra (BSS) – almost my initials. Southern Cross has a new ASK which I haven’t flown, so I was keen to try it out for future reference.

Like fishing, patience is a virtue in gliding. I watched others have check flights (lots of abbreviated circuits as instructors gave club members challenges to deal with, like sudden sink simulated by popping the dive brakes open on downwind) and short flights by students, including solos in the two-seaters and singles. Finally, at 4.45pm (last flight of the day!) it was my turn to strap into BSS.

One unpleasant discovery was that, in common with the K-13 I’d flown, the dive brake control was difficult to use for my non-extending left arm. The problem wasn’t deploying the brakes, but locking them away – my arm wouldn’t straighten enough to positively lock them. With some experimenting we found that with the seat pan back fitted I could get myself far enough forward for my dud arm to properly lock the brakes.

Felt strange to be back in the cockpit and I was nervous. I still remembered all my checks though. Amusing incident when the wing runner showed me the tow-rope, having missed the knot that had formed just behind the ring!

Takeoff was a bit messy and it took me a while to settle back into the low tow, but things settled quickly. I released at 3,000 (indicated 3,720 – Beverley is 720 feet ASL) and the instructor talked me through the local landmarks. We tried a few coordinated turns to get used to the new machine and then I tried a stall (the ASK-21 won’t really stall – it mushes along but loses lots of height).

It was incredibly beautiful up there and really brought back why I love flying gliders. The air was still and smooth. No lift, but no sink either. Grey clouds contrasted with rich greens in a darkening landscape and in the west the setting sun threw golden light across fluffy lighter coloured clouds. Gorgeous and peaceful.

Soon it was time to join the circuit to land. This is an area I really want to focus on. I have found I tend to crowd the circuit and I find it hard to judge the angles on downwind, turning onto base too early, too high. So I ask my instructor to watch me and talk me through the angles. This helps heaps, but I have to say I was not at all proud of my first landing for 14 months. Speed control a bit of a struggle (but not too bad – 55 knots target speed, sitting around 60-65), off-line a bit and needing some adjustment to get back to centreline and then my flare was too late and not positive enough, with the result that I “flew” the plane onto the ground, rather than having the glider stop flying and settle onto its wheel. 22 minutes but I was back in the air! Pleasant dinner at the Beverley pub with some of the other members and instructors – friendly bunch.

Next day (Sunday) was much quieter and while it dawned clear and promising looking, low clouds built up and closed off any hope for thermals. A bit more of a wind on this day, which would make takeoffs and landings more interesting, but not much more than 5 knots or so. The club puts on quite a professional morning briefing before operations, covering what’s expected from the day. Only two students at the start of the day, myself and a young woman recently solo for the second time after 3 years – a precise, professional flier with a military background. Later, an older gent who had been a club member many years ago arrived, but the plane/instructor/student ratio was great today – I could fly as much as my wallet could bear.

Circuits was the plan and I was happy with my progress. I got in 4 short flights and each was better than the one before. My takeoff and tow sorted themselves out, my circuit positioning and speed control and landings got much better, though I still think I need more work judging my angles and height without reference to altimeter or landmarks. On my last flight, the clouds were starting to break up a bit and large blue holes were forming. I elected to take a slightly higher tow, to 2,000 feet, which was above the main cloudbase, hoping there might be some lift about (on previous flights there’d been some tantalising blips on the variometer). There wasn’t any lift I could find, but at one point, as I looked down at the ground, I saw an eagle circling below me. He was in lift and coming up. Not a peep out of my variometer despite me being pretty much in the same column of air as him, but the difference between our weights was decisive. He gracefully angled off and was gone. I went back to earth.
Posted by smith at 6:49 AM No comments:

Saw this nice poster over at Cumulus Soaring (http://www.cumulus-soaring.com/posters.htm), with 50 Milestones in Sailplane Design. According to Cumulus Soaring, “the posters were created by Martin Simons using artwork from his 3 wonderfully interesting "Sailplanes" books”. I ordered one of the posters (a fairly simple process, but I suppose I won’t see the poster until I get home from WA where I’m presently working) but I’d never heard of the books. A bit of searching on the net I found he lives in South Australia and has written a bunch of aviation books. Must try to find some…
Posted by smith at 6:47 AM No comments: 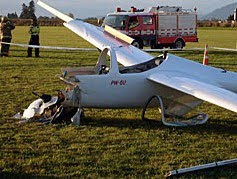 I got a shock when a fellow soaring pilot emailed me to tell me that the aircraft that I’d learnt to fly in, Taupo Gliding Club’s PW6, Papa Whisky, had been written off in a crash at Matamata in April 2009. It was the first glider I’d been in, I’d flown about 9 hours in this aircraft and soloed in it, so it held a special place in my gliding memory. It felt strange to think that it was no more.

Coincidentally, the copy of Gliding NZ that had recently arrived at the time I got the email about Papa Whisky had an item about a crash at Matamata and a net search turned up more. Apparently, Papa Whisky was at an Air Cadets camp at Matamata Gliding Club and during a simulated rope break exercise at 300 feet, with a largish instructor in the back seat and a 14 year old boy in the front seat, the glider stalled and spun in. According to the crash report, the student initiated a climbing turn to the right without sufficient airspeed (when I first heard about the crash I had thought the cause may have been due to insufficient ballast in the front seat, given the weight differential between the instructor, whom I know, and the lightweight student) which led to a stall and spin. Accident report here: http://aviation-safety.net/wikibase/wiki.php?id=59652.

Thankfully no-one was killed. The instructor suffered two broken legs, while the air cadet got serious head injuries, but has since recovered and is keen to continue flying. Sobering stuff though and enough to make me go over my rope break knowledge and options more thoroughly.
Posted by smith at 6:35 AM No comments:

Looking through my logbook and planning to update this blog (it’s been 14 months since I’ve flown – combination of working overseas and interstate, plus the birth of my lovely little daughter number two, Ruby) I realised I had had three flights with Southern Cross at Camden in April 2008, which I hadn’t recorded here and found I had little recollection of! It was a mid-week (Wednesday) visit, so it should be memorable, but I can’t recall much of it at all. According to my logbook, I took three flights in the club’s IS28 (maybe I’m repressing the memory like a victim of violence) to 2,000 feet, 1,500 and 1,500 to essentially practice circuits. My instructor’s comments are “watch swing on takeoff” (I recall now it was a windy day at Camden and the trees along the side of runway Glider 06 caused a rollover effect with turbulence on takeoff and approach) “don’t drop nose on release. Fly circuit by angle – speed control OK, flare and hold off glider, aerotow good.”

I suppose these flights were part of my plan to go solo in Australia and to get used to things at Camden. I had found I’d relied too much on the altimeter when I was learning to fly in Taupo, so I wanted to make sure I could judge my approach by the angles. This is important because in future, if I go away from the immediate environs of the field for example, I won’t be able to rely on my altimeter when making a land-out at an unfamiliar place.
Posted by smith at 6:32 AM No comments: