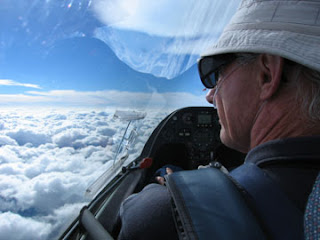 I was stooging about on the net the other week and came to the Southern Soaring website – link - http://www.soaring.co.nz/ and was surprised to recognise the mug of the man enjoying a wave flight at 17,000 feet on their latest news page!

Before I’d started my glider training at Taupo Gliding Club in New Zealand, I had sought some opinions on solo in a week courses at various places, including an online forum for the Condor gliding simulator. A member of that forum, Vic, had done his training at Taupo and was going to be there the same week I eventually decided to do the course.

We shared the on-field digs, had dinner together a few times in Taupo and generally shared the training for a few days. Nice guy – he told me he wanted to fly at Omarama to experience wave flying and flying in the alps.

Omarama is like Mecca for sailplane pilots (for any glider pilots reading please excuse this primer). It’s a small town in New Zealand’s south island and a combination of mountains and prevailing westerlies result in amazing gliding conditions, including wave flying. Some private operations provide gliding tours and training (a bit like African safaris) and many gliding enthusiasts plan to make a pilgrimage to Omarama at least once in their lives. The world gliding Grand Prix races have been held there in 2006 and 2007.

Well, Vic clearly achieved his goal. Last time I’d seen him at Taupo he had progressed to flying solo in one of the club’s single seater PW5s, and now, here was a photo of him, at 17,000 feet, oxygen canulla in place, in wave over Omarama.

I emailed him to get the good oil and he told me a little more about it.

He told me he flew in a near-new Duo Discus with the CFI of Southern Soaring Chris Rudge. He was (after briefings on use of oxygen, and the parachute) towed to 3,000 feet, then from ridge to ridge up to 8,000 feet, then as he describes it "punched up wind into rotor 100 knots indicated, very turbulent in sink, then into updraught of the rotor".
Having experienced a bit of rotor at Taupo a few weeks ago, I could visualise a bit of this (though working out how to transit the rotor is still confusing to me). He described being bounced about and then a smoothing out and they were into wave.
Oxygen went on at 10,000 feet, withy full-flow by 15,000 and he topped out at 17,500 feet! Vic says it was "cool but comfortable, outside temp. minus 5C".
Of course one of the tricky things about altitude flying is apparently you can be flying close to Vne (velocity not to exceed) but with a modest indicated airspeed. As well, in wave, you can be more or less standing still relative to the ground - and this happened to Vic - 55 knots indicated and at a virtual standstill on the GPS.
He seemed chuffed about his 3-hour flight (of which he flew all but some getting through the rotor). A lucky man...
Posted by smith at 5:02 AM No comments:

Radio endorsement and a hazy flight 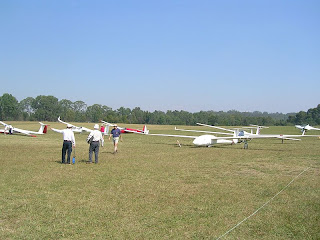 Off to Southern Cross at Camden today (Saturday 5 April 08) to attend a half-day Radio Procedures course put on by the club (a Flight Radiotelephone Operator authorisation is a pre-requisite for solo at the club and is a Gliding Federation requirement) and I hope to get in the final three of my pre-paid flights. The course started at 9.00 am, so I was on the road before 8.00 am for the 45-minute or so drive down the motorway.

The instructor, Woody, had efficiently posted out the course notes more than a week beforehand, so I'd done a bit of reading and searched on the net for relevant material. When I'd looked for Visual Terminal Charts (VTCs) for Camden, I'd come across a useful and attractive little download from the CASA (Civil Aviation Safety Authority), called the Sydney Basin Visual Pilot Guide for Fixed Wing Aircraft - see here www.casa.gov.au/pilots/download/sydney/sydney.pdf
It has lots of useful information on procedures, colour photographs etc. Nice.

This was the first time I'd been at the actual clubhouse, which is located in the bustle of buildings at the aerodrome (usually I have arrived around midday and headed straight to the strip). I relaxed for a while drinking coffee, chatting to the other students and some of the club stalwarts who were getting set up for the day and flicking through flying magazines.
It was very hazy outside, blue skies and no wind to speak of. This became important later.
It was a good course, covering airspace classification, the various charts and other info we use (WACs, VTCs, VNCs, ERCs, ERSA) and the procedures at Camden and other nearby aerodromes, particularly CTAF and CTAF-R aerodromes; radio procedures and typical calls, distress calls, and weather reports and forecasts.
Midway through the course, we were informed that the aerodrome had been closed because of poor visibility from smoke. Bugger. It looked like I was going to miss out on flying today.
However, towards the end of the course, I saw a couple of planes taking off and after getting my precious Radio Operator Endorsement sticker in my logbook, I zipped down to the field to see if it would be worth staying.
As I got there, the club had been informed the field was to be reopened in about 20 minutes. I'd already got my name down on the flying list first thing in the morning, so I was pretty sure I could get at least one flight that day. The field being closed for several hours had caused a hell of a traffic jam. Every working glider in the club fleet was out on the field waiting for the off and several privately-owned ships; and there was a full roster of AEFs (Air Experience Flights - the punters who help fund the club). Two of the club's Pawnees were waiting to go. There was going to be a wait.
As the field started to get active, I made myself busy waving off and wing-running and pretty soon the sky was full of gliders. Most released over Narellan way where there seemed to be some lift, despite the seeming lack of any wind to trigger things, but one cross-country flier, another Brian, took his tow well south, aiming to go to Picton and back.
Finally the IS-28 came back from a flight with a Japanese pilot who had turned up on the day to join the club; and it was my turn. By this time, it was almost 2.00 pm and the smoke had cleared away (though it still looked hazy). Pretty blue, but some cloud building to the west.
Clive was my instructor and we ran over my experience and logbook and talked about what I wanted to cover in this flight (local landmarks and familiarisation and approaches/landings). Then I got settled in the tractor-like machine and got in the air. A slightly messy takeoff (seemed to happen too soon), I dropped a wing, recovered, got onto the main wheel okay, got off the deck and held the glider nice and low, and then when the tug got off, I slotted into low tow.
On my third tow in Australia, low tow held no horrors for me. It had clicked and I could relax (got to learn to do that before takeoff!). I was planning to release at 3,000, but got to talking to Clive and keeping a sharp lookout (lots of other aircraft up there) and I'd reached 3,500 before i woke up and bunged off (pulled the plug, as they seem to say in the club).
It was still very hazy and smoky up top - no real distant views and even looking at local landmarks was tricky. The other Brian later said he had been unable to see the field from 20 kms south!
After getting the gear up, the flaps off her and trimmed for 55 knots, we stooged around a bit identifying landmarks and airspace boundaries, by which time we'd lost a thousand feet or so, so I found some steady lift, centred it eventually, and then climbed back up to 3,800 feet.
A few exercises - stalls (interesting this, with my normal stall approach - lift the nose steadily, hold stick back and back until the stall - the IS-28 would stall at about 35 knots. However, when I tried a gentle stall, only a bit of nose up and a slower washing off of speed, what looked a gentle angle of attack, the thing stalled at 40 knots!), stalls with incipient spins off banked turns, and some steep turns with constant airspeed, it was back to the field to join the circuit.
I did the radio call (first one since the endorsement), then did my downwind checks. I found I was starting to crowd the circuit a bit, had to extend a bit before turning base, had to use full brakes and sideslip a bit, but then went to half-brakes, managed my speed well, rounded out okay, but landed a bit early, with a small bounce.
Clive's comments - next flights, practice circuits. He marked up my logbook "flying well, practice circuits and landing."
Still busy when I got back, so no chance of another flight. Had to go to a family dinner, so pulled the pin about 4.45pm. Saw a young guy who been on the radio course with me go solo in the K13 - got a nice memory of my solo and knew how he felt.
Posted by smith at 3:57 AM No comments: