Hey George, just what is a Horse Child Breakfast? 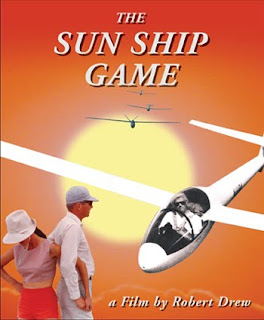 The classic soaring movie The Sun Ship Game is finally out on DVD and my copy arrived from Tom Knauff’s Knauff & Grove Soaring Supplies. This is a great movie about gliding – not a documentary, but a feature film by Robert Drew, made in the 1970s, of the comps in the runup to 1969 Nationals in Marfa Texas, including footage of that competition. The film focuses on two quite different competitors, George Moffat and Gleb Derujinsky and has some lovely footage of flying, as well as briefings etc at the comps. Some highlights for me include:

The title of this post refers to a typically late-sixties impenetrable and vaguely creepy poem by Richard Brautigan called Horse Child Breakfast, which George Moffat (English lecturer) reads to a class at the beginning of the film. The poem, if you want to check it out, along with others by Brautigan, can be found here: http://shalandar.com/richard-brautigan/pill-versus-springhill-mine-disaster.html - if you work out what a Horse Child Breakfast is, let me know.

Anyway, I’m glad I have a copy to replace the bad version I had downloaded from the net and I look forward to watching it (though I doubt whether my wife will be able to stay awake during it – she fell asleep in the first 10 minutes when I played it before).

Another weekend out west 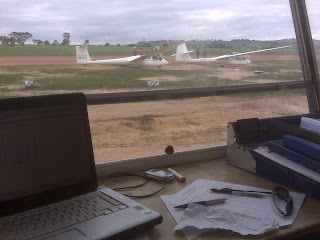 I’m really cramming some flying into my time in WA and once I again I hired a car and drove out to Beverley early on Saturday morning to arrive in time for the briefing. The plan this weekend was to concentrate on judging height and angles in the circuit. First flight was in the ASK-21 (BSS) and was to 2,000 feet with the altimeter obscured. During the tow we practiced hang-up procedures (what to do if the glider’s tow release doesn’t work), plus the signals from the tow pilot to the glider pilot to check that airbrakes aren’t open, and the wave-off sign. During the tow the instructor asked me to judge our height a number of times and each time told me I was very close, which was heartening.
I’ve always been a bit nervous during instrument-obscured flights and I tend to fly a bit messier than normal and this was the case in this flight, though I was happy with my judgement of height and angles in the circuit.
The next flight (which was by then late afternoon – there’s a lot of waiting around and helping with launches etc in gliding) included boxing the tow “very well done Brian” says my instructor, and then a gentle flight in the beautiful late afternoon light. There was little lift left, though I found and hooked onto a small weak thermal over the town for a gain of a measly 200 feet at 1-2 knots. Finally, I joined downwind and of course this was the only place where there was ample lift, so I had to extend the downwind leg even for this hangar flight. I was happy with my approach and landing.
The next day (the Sunday) was busy, with 5 flights - more circuits with the altimeter obscured and a simulated rope break and ending with a hangar flight in the Pooch. All in all I was happy with my progress and only sorry that my time in WA was coming to an end.
Posted by smith at 5:17 PM No comments:

More western flying and some surprises 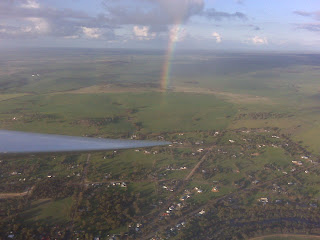 At this stage of my training I try to reflect on what I’ve learnt after every flight, as well as planning my flights to address some area of my training, or a bad habit. This weekend’s flights gave me plenty to learn from!

After an atrocious Saturday (they reported hail on the airfield before lunch, thankfully before any gliders had been pushed out) Sunday’s weather looked good for flying (maybe not for soaring) so I hired a car and drove out to Beverley that morning. The plan was, after getting the rust off in the ASK-21 the previous week, to do stalls and spins in the club’s Puchacz (since the ASK-21 won’t really stall or spin “properly”, without a spin kit fitted), a type I hadn’t flown before.

Just like someone with an ailment I stupidly googled what it was like to spin and found it had a reputation for killing pilots in spins (not sure if undeserved or not…). So I was a bit nervous before flying the “Pooch”. The spin and stall went off well – the stall was pretty predictable, bit of a buffet and the left wing dropped a little, and the spin was sudden but was under control in less than a turn (though we lost a fair bit of height). Piece of cake.

After the spin, we were still at 2,000 feet so had a bit of a stooge around to get more acquainted with the ship. I thermalled for a little in an intermittent bit of lift (more cloud suck than anything else according to the instructor) then tracked south, west of the airfield. There was a stiffish westerly blowing and right at my altitude was a wedge-tail eagle, sitting facing into the wind just hovering there. I passed him just in front, maybe 15 metres away, twice. What a glorious sight and feeling to be sharing the air with this big bird. He was so close I could see the wind ruffling his feathers and I could clearly see his big eye looking at me as we passed by.

My second flight was much more eventful and much more of a learning experience. The first lesson I learnt was look at the altimeter more closely and double-check that against the view out the canopy. I’d planned a tow to 2,000 feet (2,700 indicated) to just basically stooge around and get used to the Pooch. I had been scanning the altimeter after takeoff as part of some drills related to options in case of rope breaks at Beverley (calling out when passing 200 feet AGL to remind myself that from that height on I could consider turning back to a runway rather than looking for straight ahead landing opportunities) when I looked at the altimeter and suddenly thought “Oh, I’m passing 2,800 feet” and bunged off. I felt pretty stupid when after getting settled I noticed how low we were and realised I’d bunged off at 1,800 (1,100 feet indicated) instead of 1,000 feet higher as intended.

This necessitated some quick thinking. I turned back towards the circuit entry point (which wasn’t far away) and then decided to join the (right hand) circuit, as there was no lift about and the longer I faffed about the fewer options I’d have. However, as I approached the start of downwind and made my downwind call, I noticed another club glider, an ASK-21, joining downwind in front of me and slightly lower. I didn’t hear his call and it turned out that his radio batteries were flat and he didn’t hear my downwind call either.

This presented me with a bit of a quandary. After consulting with the instructor in the back seat about options (turn in early, land long, land on crosswind runway), I elected to do a “normal” circuit and land long and over the other glider (I was higher and could do this). The next few minutes provided me with all the evidence I needed that gliding requires constant thinking and assessment. Decision-making. Everything that the other pilot did and everything my aircraft did and everything that the air around us did, opened up or closed windows for different courses of action. My height and the position of the glider in front closed out a landing on the crosswind runway (RWY 26), so my options were then to continue with a normal circuit and see what developed later.

I was fairly well behind and above the ASK-21, so I definitely had more options than him, but I couldn’t be sure what he would do (he was a recent solo pilot on his first few flights, so I didn’t want to put him under too much pressure). In the end I watched him like a hawk and when he had turned final, I turned final well above him and to the side and landed long, watching him out my window as he touched down. He had been unaware of my presence until I appeared above him on final.

When I climbed out of the cockpit, I was feeling a bit shaken. I’d never had a heavier workload in a circuit before and I seen the potential for a disaster – a wrong move by me or the other pilot could have seen a crash. Similarly, a failure by me to recognise the problem, or to not actually change my procedure (such as continuing with a normal approach) could have been disastrous. I was reading one of Tom Knauff’s newsletters and he talked about Plan Continuation Bias, which is where a pilot fails to recognise or act on the need to change a procedure (due to changed conditions) and continues on with their “normal” plan.

Immediately afterwards I discussed what had happened with my instructor and his main comment was that I could have acted more decisively earlier, by turning to base and final earlier (well before the other glider reached his base leg) and landed longer. This would have had the advantage of showing the other glider my position.

I could have done this, but I was high on downwind and under normal circumstances I would have extended my downwind leg. To turn in earlier than I did would probably have meant full airbrakes or a much longer landing (Beverley’s strip is long though, so it may just have been an inconvenience).

In any case, I certainly learned a few things from this flight, including the need to maintain attention and to constantly reassess the situation and to act, rather than continue on with the normal plan. I also learned a little bit about the pressure that an abnormal situation can place on the pilot and the need for a cool, analytical head.

I also had a late flight in the Pooch and managed to take some photos – the light was beautiful and there were small shower clouds around, which made it even prettier. The trees alongside the main runway at Beverley lead to shadowing of the runway in the late afternoon, which can make it difficult to judge height for roundout, as you go from bright sky into darker conditions on late final. Tricky, but I made it okay.

One additional nice thing about the Beverley club is their tradition of having group dinners cooked by one or two members. Many club members stay overnight at Beverley as its 1.5 to 2 hours drive from Perth and there’s a heap of privately-owned caravans around the clubhouse, as well as some beds in the clubhouse itself and the club developed a tradition where a couple of members buy meat and vegetables and then cook a huge roast dinner, which other club members can partake of for a nominal fee (about $10). The kitchen was busy for several hours on the Saturday of the last weekend I was there and a beautiful roast lamb dinner with apple crumble and custard was provided for more than 20 people. Very neat and I noticed in the club’s magazine that I managed to sneak into the photo!
Posted by smith at 8:47 PM No comments: