An article in the Telegraph on an exhibition, at the Tate gallery, of the work of painter and sculptor Peter Lanyon caught my eye. The article mentioned that Lanyon was a glider pilot (With his discovery of gliding in 1959, Lanyon’s paintings became looser and more ethereal as he attempted to capture the rush of air and movement, the sense of floating between states of atmospheric pressure that are invisible to the naked eye) who died after a landing crash in August 1964.
﻿﻿﻿﻿

I have often thought about the connection between gliding and art and the extent to which flying sailplanes could inspire an artist. In addition to the graceful beauty of the aircraft themselves, you gain a special view of the landscape from a glider – the large canopy, the slow speed, relatively low altitude of most flying and the general absence of engine noise in gliders allows more time to appreciate the view of the ground and sky.
As well, every time I fly I marvel at the sense of buoyancy in the air and that some warm air can lift a several hundred kilogram aircraft and pilot combination.

So how did gliding inspire or influence Lanyon? An extract from a review of an exhibition Silent Rhythms by Simon Allen says “The St. Ives painter Peter Lanyon, who took up gliding in 1959, said of his aerial experience: "The air is a very definite world of activity, as complex and demanding as the sea... The thermal itself is a current of hot air rising and eventually condensing into a cloud. It is invisible and can only be apprehended by an instrument such as a glider. The basic source of all soaring flight is the thermal". These meteorological observations found expression in Lanyon's vigorous pictorial language. By untethering himself from the earth to fly above it, he discovered a new way of understanding terrestrial features and their interaction with the ever-changing sea and ambient light.”

In his own words:

‘It is impossible for me to make a painting which has no reference to the powerful environment in which I live.’

Lanyon described landscape painting as 'a true ambition like the mountaineer who cannot see a mountain without wishing to climb it or a glider pilot who cannot see the clouds without feeling the lift inside them. These things take us into places where our trial is with forces greater than ourselves, where skill and training and courage combine to make us transcend our ordinary lives.'

Gliding gave him the chance 'to experience my county from outside returning to land rather than emerging from inside.'

All interesting perspectives I can identify with.

I managed to track down some of his gliding works online and I have to say I like them. Here's a few examples below.

﻿﻿
﻿﻿ In Soaring Flight (1960) I believe the red swipe represents his glider, with the blues and whites indicating the sky and clouds.
﻿
﻿Solo Flight is another I can identify with - the red track of the glider performing what looks clearly like a circuit with either some thermalling off the end of the strip, or a tow plane searching for lift, reminds me strongly of modern-day GPS log files of my own flights, viewed in Google Earth. It seems that you can see his downwind leg, base leg and final - a non-pilot may just see a roughly drawn box. it was apparently one of his first paintings after he learned to fly. he said, 'The red is the track of something moving over the surface of the painting, and, at the same time, the track of the aircraft moving over the ground below. Blue air merges with the land. I wanted to get the sense of something far away and down below inside the red track'.

In Ginger Hill, the black line is 'suggestive of a glider’s path across an autumnal aerial landform'
﻿
﻿ Maybe this represents some ridge or hill soaring with the curving line and the suggestion of a brown hillside seen from above and to the side.

Lanyon was born in St Ives in Cornwall, and began exhibiting in 1949. He didn't sell much but received notice from the art world, exhibiting in New York by 1957 and winning a number of prizes.

He took up gliding in 1959, soloed in 1960, got his C in 1961 and his Silver C in 1962. He was flying a Slingsby Skylark 3 (see picture of the type below) at Devon on 27 August 1964  when he had a crash on landing. An eyewitness described it as follows: 'I did observe the latter part of the crash and remember the left wing of the Skylark 3 he was flying in contact with the tarmac runway and bending a great deal. This occurred at Dunkeswell with the Devon and Somerset club before its move to North Hill. I recall being told that Peter was only kept in hospital because of a comparatively minor back injury and then suddenly died when the enforced inactivity allowed a blood clot, formed at a bruise on his leg, to reach the brain.


The glider was not terminally damaged as Ralf Jones repaired and flew it himself until colliding with an Olympia whilst competing in a competition at Nympsfield. I was there tugging in a Tiger Moth at the time and well remember seeing Ralf descend by parachute and land just outside the airfield. Pieces of Skylark rained down for some time afterwards. The badly damaged Olympia arrived on the site with the unhurt pilot still aboard having decided he wasn't high enough to jump by the time he'd got the canopy off.
﻿﻿﻿﻿﻿﻿ 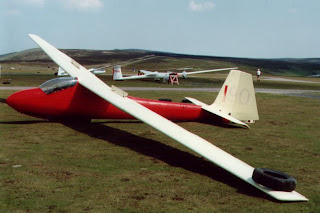 Ralf subsequently took-off again to attempt the task in a 4 series Olympia he was in the process of buying. They don't make them like that any more'. Amen!
﻿﻿
Lanyon died three days after his crash. Some research into UK crash statistics found that the Skylark's reg was BGA 974 and it's recorded as being written off on 1 July 1964.
﻿﻿
Poet W S Graham later wrote a moving tribute to him, called Thermal Stair, 'Find me a thermal to speak and soar to you from.'
Peter Lanyon is the subject of a current exhibition at the Tate St Ives.
Posted by smith at 5:56 AM

Interesting indeed. My partner and I have just been to see the remarkable Lanyon exhibition at Tate St Ives - well worth seeing, although a long way. I learned to fly at Nympsfield around the same time as Lanyon, and I also saw the collision between Ralph Jones and the Oly over Nympers. I was one of the start line officials that day, and I worked for Ralph at Southern Sailplanes for a while. Interesting how things sometimes connect... Martin Corrick